Posterstein Castle – well-fortified in the middle ages, welcoming as a museum

The 800 year old fortress Posterstein in the middle of the Thuringian “Sprottental” houses a regional history museum since 1952. The museum invites to manifold exhibitions – the topics are ranging from the castle’s history to an early 19th century salon (“Musenhof Löbichau”). In the castle’s church you find unique, baroque woodcarvings from the 17th century.

Celebrating where once the ghosts slept:
At Posterstein castle you find the historical scenery for weddings, private parties and children’s birthdays. 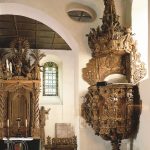 The only lead to the artist of Posterstein church's wood carvings is a small inscription underneath the gallery (picture: Museum Burg Posterstein).

One of the characteristic open-work, spiral hollow columns of the altar, in the background the gallery in Posterstein church (picture: Museum Burg Posterstein).

An old Posterstein legend says that Johannis Hopf was a wood carver who committed a deadly crime on his way through the local region and was sent to the prison of the fortress. During his captivity he is supposed to make the carvings in the chapel. It is said that Hopf’s death penalty was changed into life imprisonment as a reward for the magnificent decoration of the church.

The carvings are still to be seen in the church today. Merely a table with the inscription “JOHANNIS HOPF 1689” points out to the artist. In historical documents nothing could be found about the artist and his carvings.

Read more about the history of Posterstein Church.