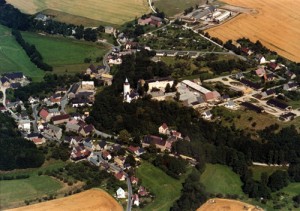 Posterstein from above in the beginning of the 1990s (picture: Museum Burg Posterstein)

The today’s Altenburger Land had been Slavic since the early Middle Ages. Sorbian tribes lived on farming and cattle breeding here. That changed in the middle of the 12thcentury when the Swabian Staufer expanded their influence to these areas. Emperor Friedrich I Barbarossa safeguarded his gained rule by knighting previous serves, the ministerial officials. They should lead new settlements, force back existing Slavic influences, effect German law, collect taxes and protect the land against enemies. So a network of small reinforcements resulted. Posterstein Castle is one of them.

The first mentioning of the fortress known itself until the 16th century as ‘Stein’(rock), can be documented for the year 1191 when the ministerial official Gerhardus de Nubodicz and his mother ‘Mechthilde de Steinne’ were mentioned in a Naumburg document. 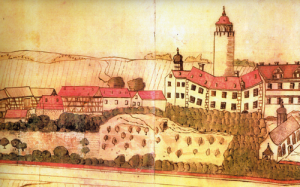 Only with its diminishing importance in the 18th century did this end. In 1305, at the time when the dynasty of the Reußen split into the older Reuß line (in Plauen) and the younger Reuß line (in Greiz), Posterstein remained under the domain of the younger line.

In 1442 Heinrich, Nickel und Ulrich Stöncz and their mother sold Posterstein with all the equipment to the Puster family. Duke Ernst, elector of Saxony asked Jan Puster together with all the other rulers to do military service. He called him according to the language usage of the time ‘Postern zum Steine’ – indicating how the village Posterstein got its name in the 16th century. 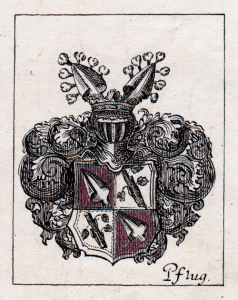 A bishop joints the possession of Posterstein

In 1528 Nickel von Ende sold (Poster)stein to his cousins Julius, Haubold, Tham, Andreas and Christoph von Pflugk.. Julius (1499-1564) worked in Christian churches (later bishop in Naumburg). Haubold Pflugk (1502-1563) managed to secure and expand the property rights. In 1575 Tham Pflugk got Posterstein. After quarrels with the Church of Nöbdenitz he was forced to have his own church in Posterstein built.

Between 1600 an 1621 the Saxon chamberlain Georg von Pflugk d.Ä. was able to stabilize the manor .Later the fortress was remodelled and the adjacent chapel was adorned with baroque carvings. Not only left the Pflugk familiy their coat of arms in the carvings of the church but a small town with tradesmen and the right to hold markets had also developed below the fortress.

A staircase hidden by a cupboard in the courtroom led to the top floor, the kitchen, the yard, the lower hall and from there to the cellar. It was possibly an escape route in those days. 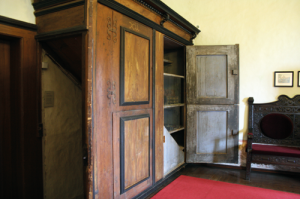 The courtroom of Posterstein castle has a hidden staircase (picture: Museum Burg Posterstein)

A close friend of August the Strong

In 1724 the Royal Saxon Field Marshall and Count Jakob Heinrich von Flemming,who was in highest Saxon Civil Service, bought the property. During his legation in Warsaw he did his bit to the vote of the elector to the Polish King. The Flemmings carried out considerable investments.

Hans Fallada as ‘Student’ on the Manor

After a few ownership changes, in 1833 the middle class Herrmann family acquired the knight’s castle Posterstein. Walter Herrmann(1871-1927) developed it into a unique seed breeding and model farm in Thuringia. The later well-known writer Hans Fallada studied on the manor in those days. (More information)

The end of the manorial rights 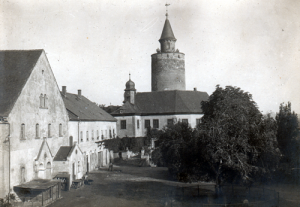 Posterstein was not destroyed during both World Wars. Nevertheless the Second World War ended with most serious changes up to now: The feudalistic structure stopped existing. At the beginning of the year 1946 with the implementation of the land reform in Thuringia the 192 hectars large manor was dispossessed, the base area split up and the utility buildings partly torn. The last landowner Kurt Herrmann (1905-1986) was deported and forced to live in West Germany. The family grave is still to be seen at the east side of the chapel.

After the end of the war refugees, who had lost all their possessions in the east, found accommodation in the castle and manor house. Later the manor house became a children’s home and the castle a museum.

The foundation of the museum Burg Posterstein 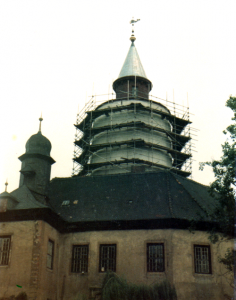 Posterstein castle during the restoration around 1984 (picture: Museum Burg Posterstein)

The museum of the district was founded in 1952. In the following decades the existing structures oft the castle could laboriously be protected without removing the defects. All rooms on the top floor gradually opened with exhibitions of regional topics. From 1982 to 1991 the protected facility could be thoroughly restored.

Views of the village Posterstein