The salon of duchess Dorothea of Courland

In the beginning of the 19th century duchess Anna Dorothea of Courland (1761-1821) owned two castles near Posterstein (Löbichau and Tannenfeld). The history of her salon is shown in a special exhibition complex. Guests were always welcome in her summer residence Löbichau, perfectly situated on the way from Berlin to Wien or from Paris to Karlsbad. The sophisticated duchess had excellent contacts to the highest social circles in Europe. She stayed as a guest at several courts and had once even a private audience given by the Pope. Guests in Löbichau were among others Tsar Alexander I, Johann Wolfgang von Goethe, Jean Paul.

Between Metternich and Talleyrand 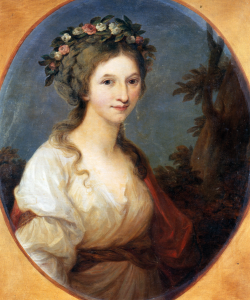 Anna Dorothea of Courland arranged an active social life in her castles uniting politics, literature, painting, music and science. Time planning was free in Löbichau and the highlights were usually the evenings when all her guests came together in the big hall of the castle at tea time. It was talked, philosophized, composed, danced and played music, sometimes the guests acted themselves.

The duchess was familiar with the most influential men of her time; she knew Metternich, Alexander I, Friedrich Wilhelm III, Napoleon and Talleyrand personally. So she was able to take part in the development of European history.

Stations in the life of the duchess of Courland

It has not only been since their joining the European Union that the Baltic States have come to the fore of the interest in the fields of politics, economy and society. Europe rather perceives those three little countries as parts of its culture gradually. The states themselves gain the self-conception of their belonging to a culture group they used to front isolated by no means. In fact in the part the Baltic States made up a connection between Western states and Middle Europe on the one side and Russia on the other side. The Dukes of Courland, together with the nobility in power at their times, cultivated that culture of changing between West and East headmost. It were them whose political, economical and cultural interests showed a European tendency, even more western during the struggle about Poland at the end of the 18th century. Peter of Courland had both the knowledge and necessary means available in order to invest in Europe and pave his own and his family’s way into the most influential and intellectual societal circles within the German states, France and Austria. His wife Anna Dorothea, having grown up far away from any huge court, proved to be a self-confident European who skilfully made use of the only means availably to women of her time in order to participate in a masculinely dominated world of politics and so increasingly emancipated – a characteristic trait her daughters adopted very fast later. 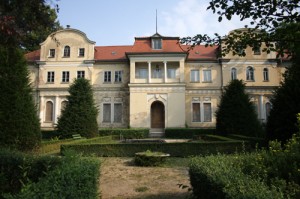 Europe in the beginning of the 19th century

Starting in view of Anna Dorothea of Courland, Museum Posterstein Castle has arranged an exhibition that firstly aims at connecting the domains of the Courlandish ducal family’s female members. By means of portraying the duchess’ life it also intends to give an understanding of how Europe used to “function” at the beginning of the 19th century, which connecting lines there were and what roles individual people were able to play. The exhibition titled “Where once I resided, where I was princess of the country…” has always been conceived as a documentary that on mobile, easily transportable boards can be shown at different of Anna Dorothea of Courland’s domains and can respectively be completed by further exhibits.

This concern involves the multilingualism of extensive texts. The catalogue at hand takes up this principle. It documents Duchess of Courland’s life and moreover provides its content in different languages if necessary: Latvian, Polish, French and German. It widely leaves out annotations but instead refers to an already available publication of Museum Posterstein Castle: “Between Metternich and Talleyrand”. 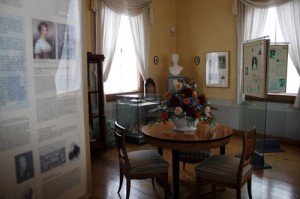 Both the exhibition as well as the publication would not have been possible without encouragement and support. We therefore give thanks to all those who readily provided us with photos, made translations free of charge and else wise granted us relief with actions and advice. We express our gratitude to the civic foundation Altenburger Land and Altenburg county for giving us support with the printing of the catalogue.

A young woman among European politicians and aristocrats

On 3rd February 1761 the “Graf” von Medem became father of a daughter in Mesothen, Courland: Anna Charlotte Dorothea. Courland was far away from all political and intellectual centres in Europe. She was half sister to the literary woman Elisa von der Recke. Dorothea was given an education that was in keeping with her station. 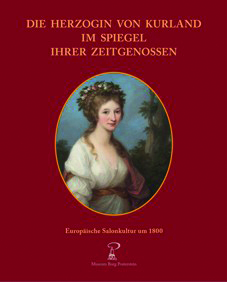 At the tender age of 17 she was married to no less a person than “Land lord” Peter Biron, Duke of Courland. This 55-year-old man had certain expectations of his beautiful young wife: an heir was needed, an heir that secured the continuity of the ducal house. Children were born. However, to the great regret of the couple only one son was born and he died early. All the other children were girls and very beautiful. The dukedom got into political difficulties and into the trouble spot of the great powers Russia, Austria and Prussia. The duke was a financial genius, but hardly a diplomat. Instead he sent his young and beautiful wife and thus Anna Dorothea entered the society of Europe in 1790. She socialised in Warsaw and Berlin, became emancipated from her husband, she showed in Salons and had some love affairs.

A residence of her own was needed and Löbichau was chosen.

The duke died and left a princely property. One of the tasks of a mother was to get her daughters married in keeping with their station. No happy marriages were created, but the marriage of the youngest daughter to Edmond de Talleyrand-Perigord, a nephew of the French foreign minister, gave them the longed for connection to the world’s capital Paris and the acquaintances of one of the most influential and active statesmen of this time – Charles Maurice de Talleyrand.